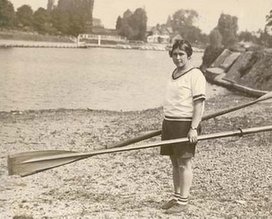 In 1926 Amy Gentry started Weybridge Ladies Amateur Rowing Club. By the time she died in 1976 Amy had played a central role in establishing women’s rowing, both in Britain and internationally at the Olympics.

Amy Constance Gentry (26 July 1903 – 11 June 1976) was a pioneer of women's rowing in England, starting at Weybridge Rowing Club where she founded a ladies section in 1920. She competed in a variety of styles and was the undefeated champion of the women's single scull from 1932 to 1934. She then became a successful administrator of the sport.

During World War II she was secretary to the famous Vickers engineer, Barnes Wallis, and assisted him with his experiments in develoing a bouncing bomb to destroy German dams.

Amy Gentry was born in Barnes, close to the River Thames, and participated in water sports from an early age; racing dinghies at the age of six. In 1919 Weybridge Rowing Club organised celebrations of the Allied victory in the First World War, and she took part in a race of ladies' fours. This was very successful and it helped her in establishing the club's ladies' section in 1920. In 1925, she was a member of a club team that defeated crews from France, Belgium and the Netherlands at a royal charity regatta in Brussels. She founded a separate Weybridge ladies' rowing club in 1926 and later became its chair – a position she retained until her death. 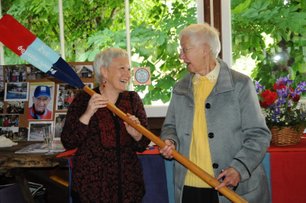 WLARC's current President, Eve Gould, was a rowing colleague for the last 22 years of Amy's life. In 2015 Eve celebrated her 60th anniversary with WLARC.

Amy rowed with her brother Frank in mixed double sculling events and they won three consecutive championships from 1924 to 1926. In 1927, she took part in the first Women's Eights Head of the River Race, in which her Weybridge ladies club boat won.  Amy went on to become British single sculls champion in 1932, 1933, and 1934, and retired undefeated. She also helped administer the sport of rowing, acting as secretary of the Women's Amateur Rowing Association between 1926 and 1938. She chaired it, and its successor body, the Women's Committee of the Amateur Rowing Association, until retiring in 1968. In 1960, she persuaded the International Rowing Federation to hold its Women's European Championships in London. She was awarded the Order of the British Empire for services to rowing in 1969.

Amy died just two weeks before a Weybridge Ladies coxed Four competed at the 1976 Montreal Olympics - the first Olympics in which female rowers were allowed to compete.

Find us on Google Maps: 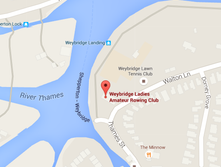